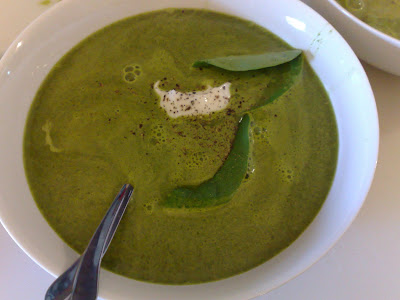 If you've been checking in with us over the past few weeks, you'd know that we've been trying to stick with seasonal produce in some way. This is no exception as British watercress is in season and this soup features it heavily.

The soup is crisp, clean and healthy. It also appears in Gordon Ramsay's Healthy Appetites. I thought it was OK, though it was a bit much. I could see serving it as a smallish first course of soup, vice a main (like we had it). In any case, it featured ingredients at their peak, which is important. Give it a go if you are craving some fresh greens and a clean, cool soup.

Heat the olive oil in a large saucepan and add the onion and potato. Saute gently, stirring frequently, for about 10 minutes until the vegetables are soft but not brown.

Add the watercress and spinach and pour enough stock to cover the vegetables. Bring to the boil and season to taste with salt, pepper and a squeeze of lemon juice. As soon as the spinach and watercress have wilted, remove the pan from the heat.

Puree the soup in two batches using a blender (in batches) or a stick-blender (puree in the pan). Pour into a wide bowl and leave to cool completely. Cover with clingfilm and chill for a few hours or overnight.

To serve, pass the soup through a sieve, using the back of a ladle to stir it around and pass the liquid through. Pour the soup into chilled soup bowls and garnish with a few baby spinach leaves. Add a small dollop of creme fraiche if you wish and grind over some pepper. Serves 4.
Posted by Kevin and Vanessa at 18:50